Somehow, after everything they’ve been through, Jake Caplin and Charley Redford made their way back to one another. But finding each other and staying together are two completely different things.

When Charley’s world is flipped upside down, she begins to question the choices and decisions she’s made since her arrival in Edinburgh, and in an effort to grip onto what she holds most dear she believes she must sacrifice her love for Jake.

Returning to the States for her senior year, Charley struggles to find peace and happiness. While everyone else seems to be finding themselves in college, Charley is terrified that, along with almost everything else that’s important to her, she’s lost herself.

While friends and family deal with their own tumultuous lives, there is one person resolved to uncover the reason behind Charley’s sudden defection and unhappiness. Refusing to give up without a fight, Jake believes he is the only one who can truly understand what Charley is going through, and this time he’s determined to prove he’s there for her no matter what obstacles are thrown in their way.

However, as Charley strives through the biggest personal journey of her life thus far, there is no guarantee that the woman she is becoming will still need Jake as much as the girl she once was did…

COVER REVEAL: Out of the Shallows

Book Series:  Into the Deep

Epic. Unforgettable. Heartbreaking. A must read. That is how I would describe Into the Deep because I loved this book to no end and could not put it down. The story of Charley and Jake is so intoxicatingly addictive, you will find yourself cherishing the heart-breaking moments as much as the heart-warming ones. At the end of the first book, we were not left with a nail-biting cliffhanger, we were in a happy place, content to let these characters go… at least for a little while. Today, I am super-excited to be the one showing you for the very first time the stunning cover, as well as the first ever peek at the conclusion of Charley and Jake’s love story, Out of the Shallows…

“Is it possible to die of sex exhaustion?” I panted, collapsing in a sprawl across Jake’s sweat dampened chest.

It heaved beneath my cheek as he lazily stroked my spine. “I’m thinking yes.”

“That was…” I groaned at the hot feel of him inside of me.

“Mindblowing?” he offered with a suspicious amount of smugness in his voice. “Told you it would be.”

I bit his shoulder gently. “Cocky.”

“I dare you to leave teeth marks,” Jake squeezed my ass. “I’d love explaining it to people.”

“What people?” I mumbled irritably. “You’re inside the only person who should be seeing you shirtless, mister.”

He chuckled and I burrowed deeper against the sound in his throat. “The guys and I don’t really care about walking around the apartment shirtless.”

Despite my sex exhaustion, I found the energy to jerk away from him, my hands pressed to his chest as I scowled down at him. “In other words you’d love to explain those marks to Lowe.”

Inured to my glower, Jake tucked my long hair behind my ear, before following the wavy strand of platinum down over my breast. “It would make a point.”

“A point he is well aware of. The traitor dumped me in your hands last night.”

Before I could respond he took me by surprise, wrapping his arms tightly around me as he sat up. Our lips almost brushed as he brought us chest to chest. Sensing I wasn’t going anywhere, any time soon, I shifted off my knees and wrapped my legs around his waist. Jake’s eyes darkened with the movement.

“Not yet,” he crushed me against him, whispering the words across my mouth. “Anyway, we have stuff to talk about.”

I instantly wanted to pull away but Jake cupped his hand around my nape, forcing me to look at him. I jerked against his hold.

“Good, we’ll start with that,” he muttered darkly. “Why do you keep pulling away from me?”

“I told you I don’t like it when you hold me by the neck like that. It’s not a big deal.” It was so a big deal. And Jake knew it was. He just didn’t know why.

The truth was he used to hold me like that when he wanted my entire focus. It was kind of intense and more than kind of sexual, and I thought it was something he just did with me. However, I’d once witnessed him holding his ex-girlfriend Melissa in the exact same way, and as stupid as I knew it was, it bothered me. A whole lot.

“Next question,” I sighed, tugging his hand off my neck.

Jake didn’t look happy but he relented. “When are you thinking about telling your parents about us?”

“Well,” I wriggled on him with a cheeky smile, “I was thinking we should uncover the plot of some evil mastermind and you can save the world. There’s no way my parents won’t be happy for us to be back together after that. It would be petty.”

“Stop being cute,” he said quietly, kneading the muscles in my lower back. “I’m trying to be serious and I can’t do that when you’re sitting on me naked, acting all cute.”

“Then I guess my work here is done,” I smiled and kissed him hard. Jake’s arms turned to steel around me as he hauled me closer, deepening the kiss with a groan that reverberated through me in such a delicious way…

I wrapped my arms around him, my fingers curling around his hair.

Jake broke our kiss, grabbing my upper arms to push me gently back.

He scowled at me. “Play fair.”

“How is trying to have a conversation with my girlfriend not playing fair?” he narrowed his eyes on me. “How did I become the chick in this scenario?”

Laughing, I ran my fingers through his hair, loving the way his lashes lowered over his eyes in pleasure at my touch. “You did that all by yourself.”

Into the Deep - Recommended Reading Order 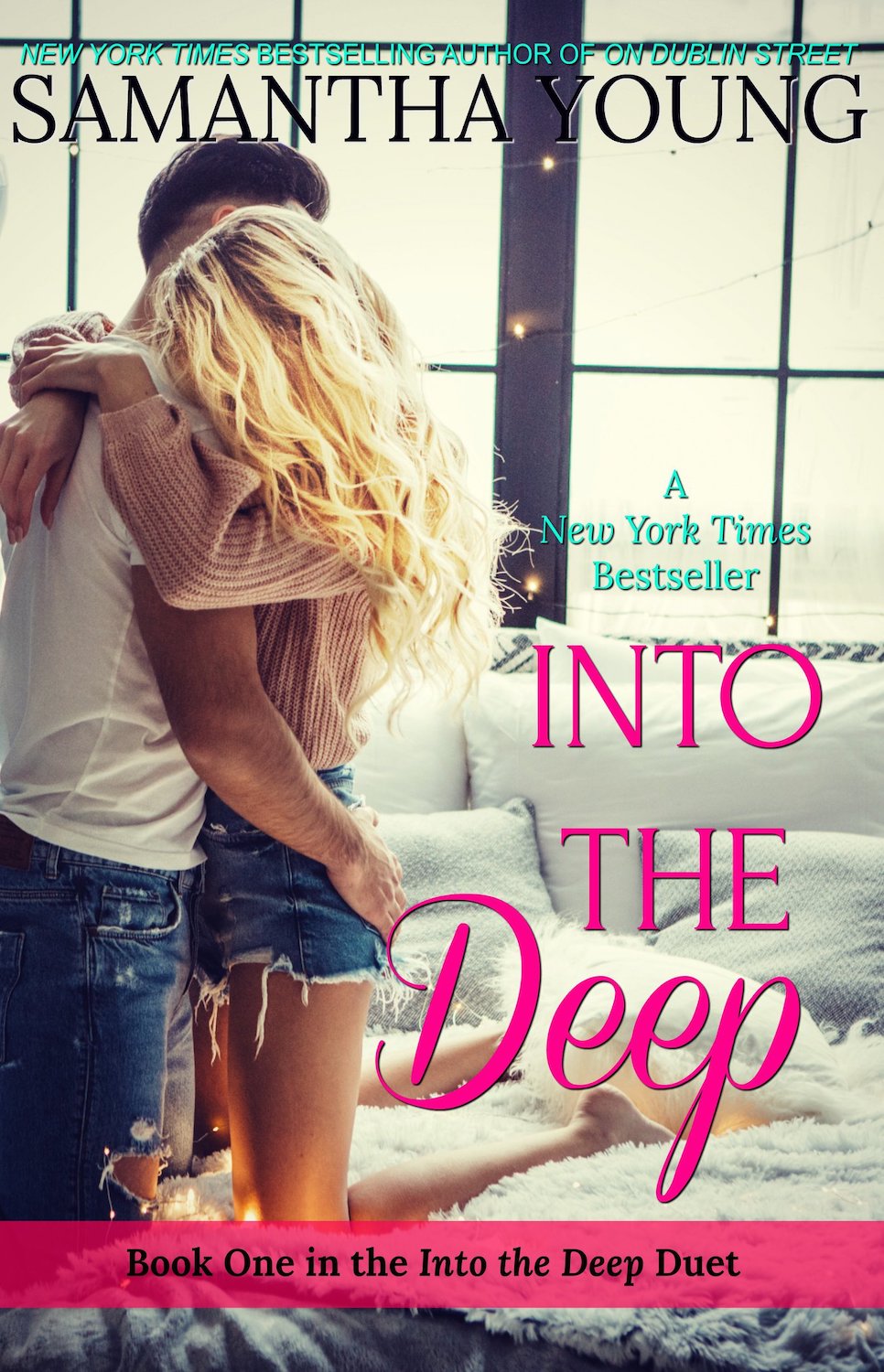 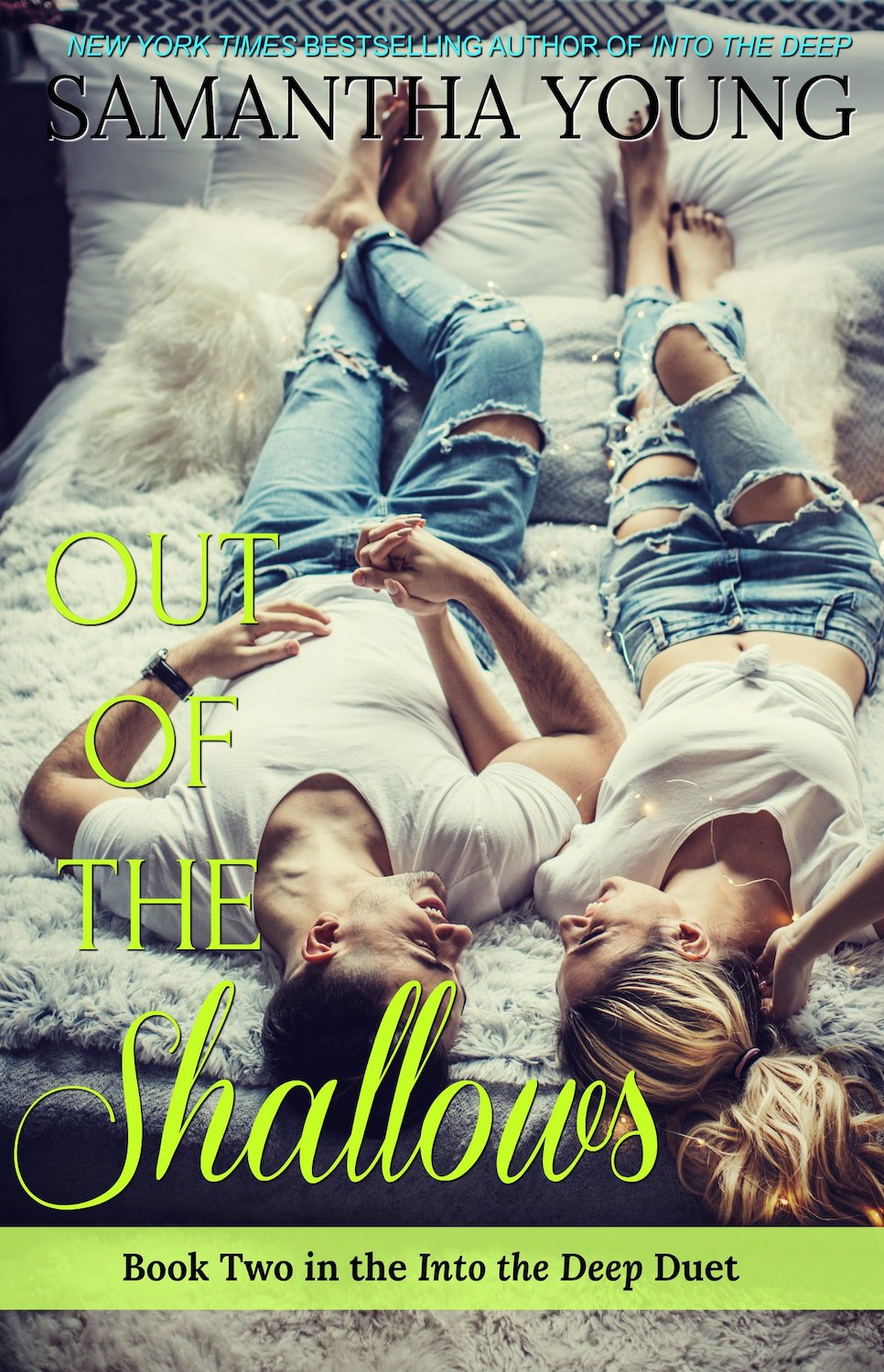 EXCELLENT!!! I cannot wait for this book! I love all of your books! Thanks so much for giving us a sneak!

I read a teaser for Into the Deep. I liked it, but for some reason didn’t remember the name of the book. I kept remembering it, I think it might have been the first chapter, and when I saw the blurb, I had to buy the book. I loved Into the Deep, and I can’t wait for the rest of their story!!

you made my day! l adored the first book, can’t wait for more!

How to wait Lol loveJake and Charley excited about Claudia and Beck too. I need moar. Thanks for the teaser

OMG I can’t wait, but I really do hope they get their relationship sorted out I love HEA’s and would hate for this not to happen to them, I love how they are back together

Samantha this is great. So stoked to read this.

So excited about this book!! Cannot WAIT to read it! LOVE Samantha Young!

So can’t wait for book twoxx

So excited for Out of the Shallows!

Ahhh! I can’t wait for more Jake and Charley!!!!

Sooooooo cannot wait for this book……. Only wish it was coming out sooner!!! LOVE, LOVE LOVE Samantha’s books! My new favorite writer!

I wish she released new books every month or two :D
Cannot wait to continue to read this story.

I’m so excited! I have read into the deep over and over! January can’t come fast enough!

Loved it so much! Can’t wait for the rest of their story. They deserve happiness together!

Can’t wait for January …read into the deep twice already!!! Loved all ur other books!!!!!

Great excerpt. I’m really interested how Jake will pull this through he has to do a lot of work to convince everyone . They deserve a second chance January 2014 is so far away . Hoping for more teasers

Please, please, please give us a happy ever after between Charley and Jake…..together!!! ;)