Positive. With two little lines on a pregnancy test, everything in Lizzy Rollins’ ordinary life is about to change forever. And all because of one big mistake in Vegas with Ben Nicholson, the irresistibly sexy bass player for Stage Dive. So what if Ben’s the only man she’s ever met who can make her feel completely safe, cherished, and out of control with desire at the same time? Lizzy knows the gorgeous rock star isn’t looking for anything more permanent than a good time, no matter how much she wishes differently.

Ben knows Lizzy is off limits. Completely and utterly. She’s his best friend’s little sister now, and no matter how hot the chemistry is between them, no matter how sweet and sexy she is, he’s not going to go there. But when Ben is forced to keep the one girl he’s always had a weakness for out of trouble in Sin City, he quickly learns that what happens in Vegas, doesn’t always stay there.

Now he and Lizzie are connected in the deepest way possible…but will it lead to a connection of the heart?

“You’re the only girl I want.”

Well, tickle me pink and call me a Stage Dive groupie for life, because this was the perfect ending to a series I adored beginning to end. We’ve been collecting clues about their relationship for so long, little breadcrumbs Ms Scott has been leaving here and there just to keep us speculating, and now we finally get to hear it all and fall in love with yet another couple in this crazy, addictive rock star family. As the entire Stage Dive mob comes together to take care of one of their own, we are given one of the most emotional and angst-ridden stories of the lot, and yet another reason to love this series and secretly hope we haven’t seen the last of them.

“The moment I came into Ben Nicholson’s orbit I was helpless, powerless to resist his pull.”

As the little sister of the wife of one of Stage Dive’s most rowdy members, Liz was immediately brought into the fold and regarded as family, but from the first moment she set eyes on him, she knew her heart would always beat for one man and one man alone—the bearded wonder also known as the group’s bassist, Ben Nicholson. Eight years her senior, Ben is a loner, a natural-born musician who cherishes his freedom and not having any ties in life preventing him from enjoying his rock star lifestyle, but even against his better judgement, he cannot fight the pull of the young woman who is set on seducing him and obliterate any semblance of self-control he pretends to have around her. One night of unrestrained passion, one night of pretending the world around them does not exist, and their fates become forever intertwined.

“It was like we were each other’s whole world. Nothing else existed beyond the bed.”

Finding herself an unwedded, expectant mother at twenty-one is not what Liz ever thought her life would amount to, but her heartbreak only deepens when she realises the man she has also fallen desperately in love with could never give her what her heart aches for the most—a permanent place in his life. So a friendship is forged for the sake of their unborn baby, a friendship that neither of them truly feel comfortable with or emotionally fulfilled by, but they try, against everything their hearts scream at them to feel…until they cannot pretend any longer.

“One day I’d find someone else who made me feel like Ben did. I just had to wait it out.”

But falling in love with a man who does not know how to make room for someone else in his life, a man already living his dream, proves to be a hurdle Liz never expected to have to face, especially with a baby on the way, adding an incredibly gripping level of angst to a story that is as emotional as it is entertaining. A story of two people finding in each other what they didn’t even know they sought and needed the most in life—a place to belong—this was the perfect send-off to a group of characters whose tales have each become favourites of mine. Ms Scott is an expect at giving us stories we become absorbed in, often giggling uncontrollably while our hearts are clenching from the underlying angst behind the jests, her colourful characters owning the pages they live on, and never losing our undivided attention. A drunken Las Vegas wedding between two strangers, an unexpected and rather hilarious match made in Heaven between two complete opposites, a story of unrequited love under the guise of a friends with benefits pact, and now this series gets its cherry on top with an unexpected pregnancy scenario that evolves into a truly touching and flawlessly paced romance between a kickass heroine whose strength of character is inspiring, and her bearded wonder, the man who never knew what his life was missing until he met her.

My heart is still hurting when I re-read some of my favourite scenes from this book, the deliciously prickly angst getting to me every single time. Another must read from this very talented author, another slam dunk in the series. Let’s hope it is not truly the last…

“Just give me a chance to catch up and I promise, Lizzy, I will have your back.”

“Thank you for the lift home,” I said.

“Any time. I mean that.” He rested a hand on the steering wheel, shifting slightly to look my way.

Happy chemicals stirred inside of me. Lustful, crazy things telling me to jump him, to climb all over him and cover his gorgeous face in kisses. To rub my jaw against his beard and see if it felt soft or not. To let him see exactly how he affected me, how adored he could be.

“Kills me when you look at me like that,” he murmured.

I just smiled. My tongue was too tangled for any attempt at wit. Thing was, I couldn’t not look at him like that. It just wasn’t in me to be any other way, not with him.

He exhaled hard, staring out the windshield. “I go to that club a couple of times a week to pick up. Place like that? Easy as hell. Pretty much the only reason people go there is to get drunk and get laid.”

Dreamy dark eyes pinned me in place, owning me. He licked his lips. Every time he did that my hormones erupted into the song of joy, a full orchestra plus heavenly choir accompanying. The whole shebang. It was ridiculous.

“Who says you shouldn’t?” I asked, leaning closer.

“This isn’t about them. It’s about you and me.”

“Sweetheart. Liz. . . .” The deep, dirty way he said my name, holy shit. His voice rumbled through me, lighting fires and causing chaos everywhere it went. I’d never be the same.

“Yeah?” I leaned closer, and then closer still, heart thundering and lips at the ready. Never in my life had kissing someone seemed so important. I needed his mouth on mine. His breath and his body, all of him.

I turned, propping a knee beneath me to help with the height difference. Hesitant but hopeful smile in place, I put my hand on his shoulder, getting closer. F*ck waiting on him to make the first move. Time to go after what I wanted.

That’s when it registered. Ben’s body language was all wrong. The man wasn’t moving into me, wanting me back. I was alone in this.

He stared straight ahead. “You should go in.”

Whatever face I had on, it wasn’t happy. “You want me to go?”

“It’s for the best,” I parroted, staring perplexed at the dogged shadows on his face.

“And you answer to the band for who you date?”

I cleared my throat. “No, we’re not dating. But god, we spent hours talking and texting to each other.”

“Right.” All of the emotion inside me felt huge, overwhelming. Still my mind worked, turning all of the evidence over, trying to figure out where I’d lost the track. How the f*ck I came to be flailing in the woods. “I think you were a little bored, a little lonely maybe, so you played with me.”

With a grimace he turned away.

At least now I knew where I stood. As if that was any real consolation. I pushed open the passenger’s side door, climbing down.

I slammed the truck door shut, cold metal stinging the palms of my hands. Done with him. I was so damn done with him. The bitter night air slapped me in the face, waking me right the hell up. How f*cking embarrassing. I’d felt so much and been so sure. Went to show you how much I knew.

Not a single f*cking thing.

Time to put my heart and hopes back on ice. 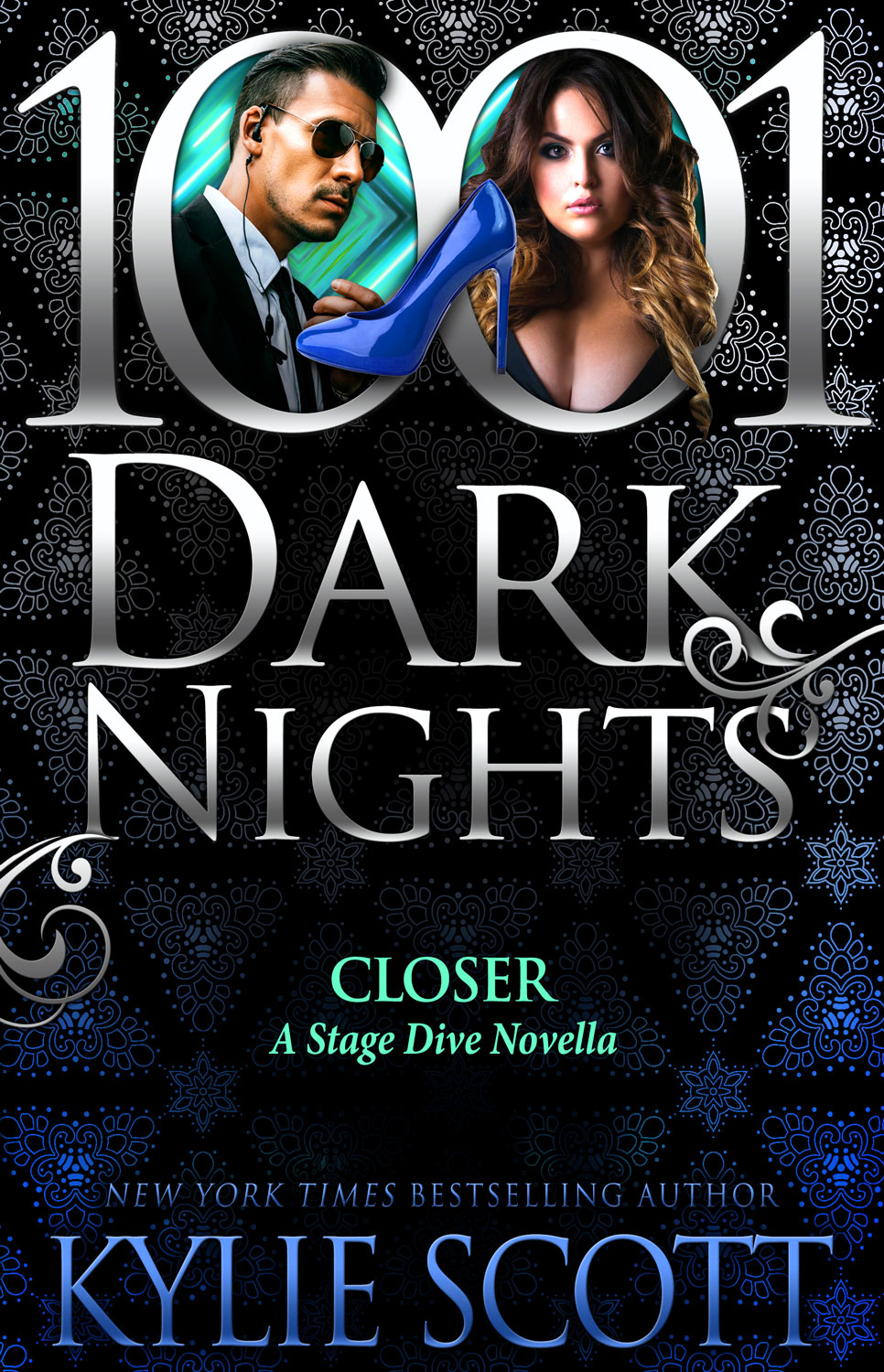 I have not read any of this series yet, but after this review, I will be moving it up next on my TBR list. Great review! The story sounds deliciously full of angst. Can’t wait to dive in! Lol! Couldn’t resist.

fantastic review! this was one series that was quite epic for me! not only were the guys absolutely swoonworthy (i couldnt pick a favorite! although….DAVID started my love for this series haha) but the women are strong and down to earth and so funny that I loved them all! this book was indeed the cherry on top!!

I read Deep in one day and I loved it. The perfect end to an amazing series. Kylie Scott knows how to balance humor and romance perfectly and I can truly say I’d read anything she writes!

I just read the whole series. One book per day I can’t decide which one I like the best….
I want MORE!