You know how everyone says when one door closes another one opens?

At the time, you find this statement obnoxious as all get out because a) you don’t really know what the future holds, it certainly hasn’t been a cakewalk so far, and b) the thought of change is unbearable. You feel like your life is falling apart and everyone around is feeding you clichés like they’re made out of kale or quinoa or whatever the trend health food is right now. You don’t want kale clichés, you want double-chocolate fudge realisms, and you want them now. You just want things the way they were, but then something happens, a moment, an instant that sets you out on a path toward happiness you never knew could exist, and suddenly you think, huh, I don’t think I want double-chocolate fudge anymore. I think I’m in the mood for this heaping serving of strawberry cheesecake sitting in front of me…with a side of kale. And a pair of split pants, but we won’t get into that right now.

Graham Glenn may have tossed her in, but Oliver Finn made her feel again.

Fisher Amelie is my jam. The beauty of her words never fails to take my breath away, so when a new book of hers is on its way, I get really really excited. Today, I am truly honoured to share with you a never-seen-before excerpt from her upcoming standalone novel, Penny in London, releasing on 1 Aug 2016. And about that cover…there are simply no words to do that beauty justice.

“Hello, all! My name is Fisher Amelie and I wrote a little story called Penny in London. Thank you so much to Natasha for hosting me! And thank you for joining me today. I hope you enjoy this exclusive excerpt.”
—Fisher Amelie

Anger
[ Ang-ger ]
noun
1. A strong feeling of displeasure and belligerence aroused by a wrong; wrath; ire.

Graham Glenn is a proper prat whose philandering ways have courted the anger of one Miss Penelope Beckett.

“I love you so much, Graham. You’re my everything,” I told him.

Graham held me up, so he could have had a point. I attempted to boop his nose with my finger but missed. Yup, he was right. I looked up into his face. “Don’t you love me back?” I asked.

He looked at me with pity and the humiliation this caused sobered me slightly. I stood tall. Well, as tall as my five-foot-seven-inch frame could stand next to his six-foot-four one. “Oh,” I realized. “You don’t, do you?”

“I’m sorry, Penelope, but I’ve met someone else,” he said, wounding me into a clean, clear mind.

“Oh, that’s too bad,” I said, stumbling back. I rested my tired soul against a nearby lamppost, sinking down until my rear end met the larger base.

My glassy eyes met his steady ones. “I moved all the way here for you.”

Standing collected and looking perfectly English, Graham tucked his scarf into his buttoned jacket. I studied my black tights. There was a hole at the knee. How did that get there? I wondered. My burgundy pleated skirt was wrinkled at the hem from where I’d gripped it earlier. I always did this when I was around Graham. It was unconscious, as if I was constantly bracing myself for news. It was an insecurity, or so I thought. Apparently that feeling was warranted. I looked at him again.

“I realize how inconvenient that is, darling,” he assuaged.

I fought the urge to vomit at his feet. “Please stop calling me that.”

He sighed as if I was a petulant child. “Penelope,” he called out. He always used my full name. That was Graham, always so formal. “I’ll need you out of my flat by Monday evening, preferably before I return home from work.”

Tears fell. “Where should I go?” I asked, incredulous.

“I’ll leave a few hundred pounds on our wardrobe,” he said. Our wardrobe. Our wardrobe kept running through my mind on a loop. “It should be enough to get you back to Dallas.”

I looked at him, wondering who he was, wondering what had happened to the man who’d begged me to join him in London, wondering where the one who promised me forever had gone.

He started to walk away, but I called out to him. “Where are you going?” I asked.

“To her house,” he answered. A bullet of the tongue that ran sharply through my struggling heart.

It all felt so abrupt.

Graham’s work friends ran through my head, spinning until it landed on one face in particular.

He rolled his shoulders. He always did this when he was uncomfortable. I had my answer before he even spoke.

“I can see the appeal,” I told him, standing up. I smoothed my skirt, examined my Mary Jane heels, tucked in my cream silk blouse, and caught the loose pieces of my hair, tucking them back into my French twist. I jerked my fingers back. I only wore my hair that way because Graham insisted I wear it that way. My hands found my hair once again and pulled the pins out, letting them fall to my feet, raining little black pieces of metal. I shook my long black curled hair and let it spill over my shoulders.

Graham rolled his eyes at me. “Does that bother you, Graham?” I asked. “No longer yours to fuss over, though. Not anymore.”

I shooed him away with my deep red lacquered nails, a color he picked out. He stood there, instead, and watched me. In an act of defiance, I untucked my blouse, unbuttoning it at the top, and exposed my nude-colored camisole. My hands reached up my skirt and yanked down my thigh-high black hose, letting it droop at my ankles over the straps of my heels.

When I reached for the tied belt at my waist, Graham gritted out, “Pull yourself together, Penelope.”

He huffed. “Fine, look the fool you insist on acting like.” We stood for half a minute, but it felt like an hour. His eyes softened and he reached for my elbow and for some reason, I let him. He leaned into me and kissed a cheek softly. “Goodbye, Penelope.”

He left me with the last word, which wasn’t as satisfying as I’d have liked.

When he walked out of sight, I crumpled onto the bottom step of a nearby row house as I cried into my hands. I heard a group of boys exiting Chelsea Potter and heading my direction. I pulled up my hose and buttoned my blouse to avoid unwanted attention, but it did no good. My pale skin, dark hair, and blue eyes invited their voices regardless.

“’Allo, love! Lookin’ for a bit of company tonight?” one asked.

“No, thank you,” I told them, running a hand through my hair as I attempted to avoid eye contact.

“Oh, come now, darlin’! I’ve a nice warm bed for one such as yourself,” another teased. His friends laughed while I cringed.

“Lovely bird, sing us a song then!” a particularly drunk one rang out.

“I’ll keep ya safe, Yank. Come wit me then,” a cockney accent promised.

I shook my head at them and buried my face in a veil of hair. It worked. Sort of.

They turned toward me as they passed and catcalled but eventually rounded the corner.

The little fraidy-cat adrenaline rush they gave me dried the tears. I bolted upright, desperate to get back to my flat. Well, my former flat. Graham’s flat.

I walked back toward the pub to flag down a cabbie. A black cab swooped in for me and stuck his hand out of his window to open my door for me. I climbed in and he shut it behind me.

“Where to, love?” a middle-aged man with a giant mustache and even bigger smile asked.

He shot forward and neither of us spoke for the short ride, which I was appreciative of.

As he approached our street, no, Graham’s street, I leaned forward and placed my hand on the edge of his open partition window. “Number seven, please?”

He slowed down and noticed the state of the road. I cringed. “’Fraid you’ll have to walk, love. No way of gettin in n’ out there. Construction and all that.”

“That’s fine.” I sighed, throwing a few pounds through the window and opening the door before he could get to it.

When I got out, the tears renewed tenfold. I found myself leaning against the wrought iron fences of a few terraced houses. Just get home. Just get home, I kept telling myself.

“It’s not your home, though,” I confessed to the wind, which brought on a whole new rush of tears.

Blubbering like a giant baby, I was too distracted by my pain to remember my neighbor’s exposed sunken terrace garden, a ten-foot drop onto concrete.

Of course was all I remembered thinking as I tumbled down the rabbit hole. 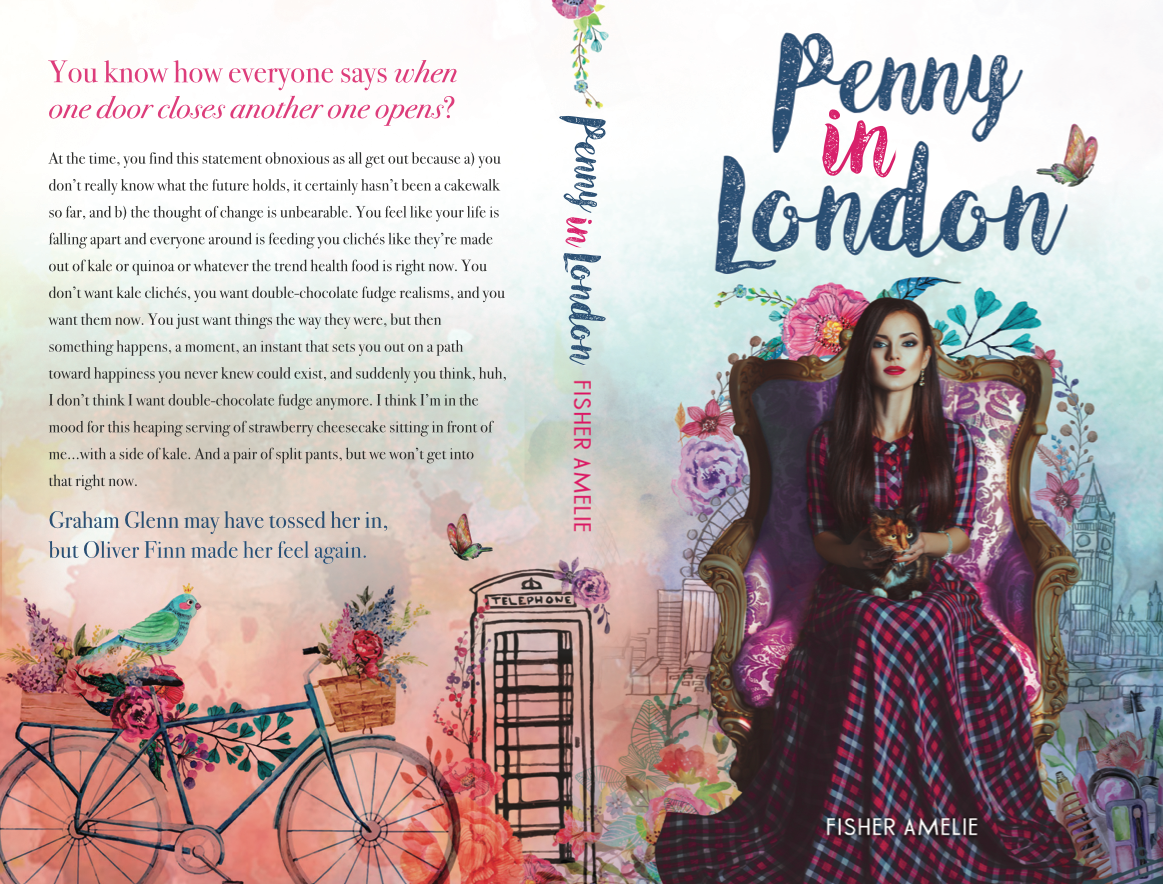