The red balloon held her secret. The boy who found it changed her life…

At sixteen, Emmie Blue stood in the fields of her school and released a red balloon into the sky. Attached was her name, her email address…and a secret she desperately wanted to be free of. Weeks later, on a beach in France, Lucas Moreau discovered the balloon and immediately emailed the attached addressed, sparking an intense friendship between the two teens.

Now, fourteen years later, Emmie is hiding the fact that she’s desperately in love with Lucas. She has pinned all her hopes on him and waits patiently for him to finally admit that she’s the one for him. So dedicated to her love for Lucas, Emmie has all but neglected her life outside of this relationship—she’s given up the search for her absentee father, no longer tries to build bridges with her distant mother, and lives as a lodger to an old lady she barely knows after being laid off from her job. And when Lucas tells Emmie he has a big question to ask her, she’s convinced this is the moment he’ll reveal his feelings for her. But nothing in life ever quite goes as planned, does it?

Emmie Blue is about to learn everything she thinks she knows about life (and love) is just that: what she thinks she knows. Is there such thing as meant to be? Or is it true when they say that life is what happens when you are busy making other plans?

An uplifting and powerful story about finding yourself as you grow up and into your own adulthood is out this week from author Lia Louis, and I have a sneak peek for you.

WHEN TO SEEK MEDICAL HELP:

On the other side of the duvet, the air-conditioning unit rumbles on the wall like a boiling kettle, the sticky summer heat wave shut outside. My musty room back at home in Fishers Way is a tiny furnace in comparison. So hot that the second the temperature tips past the seventy-three-degree mark, I go to bed convinced that by morning I’ll be found shriveled by my landlady, like a raisin in a nightie. No risk of that happening here, staying with the Moreaus, though. So I suppose there is always that. Even in the darkest of times, it is always important to focus, if you can, on the positives. No matter how small. No matter how few.

I pull back the duvet and sit up in bed, pressing the heel of my hand to my forehead, which, ironically, is beginning to throb with the beginnings of a real headache, and click on the bedside lamp. I calculated on the ferry over, and counting on my fingers, that I have spent thirteen of my birthdays here—our birthdays—in the Moreaus’ back garden. My first was when Lucas and I turned seventeen. The ninth of June 2005. It was the first time I had ever stayed here, and only our second ever face-to-face meeting, but Lucas’s parents treated me like a family member who’d visited a thousand times before. “Lucas speaks only of you,” Jean had said as he’d shown me around the guest cottage, and then he’d brought his shoulders to his ears and smiled, almost defeatedly, as if to say, “And if you’re important to my son, you’re important to us.” That weekend, Lucas’s parents bought us a birthday cake each and took us to dinner at Le Rivage—newly opened at the time, smelling of fresh paint and freshly sawed wood. It was one of the first restaurants I’d ever been in, although I was way too embarrassed to admit it to them. The next day, Lucas and I went with his older brother, Eliot, and a group of their friends to a gig, and although I definitely didn’t dance, not once, it was one of the best nights I’d ever had. Not because it was fun. But because of how they all saw me. As one of them. As a regular seventeen-year-old, world at her feet. Not “that girl from Fortescue Lane.” Just Emmie Blue, cocktail in hand, out for a good time before she finally escaped school and started college. And tomorrow, on our fourteenth birthday together, we will be thirty. Thirty years old. The age I’ve kept my eye on over the years, like a prize in the distance, like a safe haven, a warm light in the dark on the horizon. Because everyone is settled at thirty, aren’t they? You’re an adult at thirty—fully fledged—and everyone knows who they are. Or at least, everyone knows exactly where they are going, even if they haven’t quite made it there yet.

I stretch over to the side of the bed now and pull my suitcase onto the bed. I unzip it. Everything is still folded neatly inside from when I packed it last night, excitement fizzing in my stomach, imagining exactly what would happen after he asked me. After Balloon Girl looked across that table, on the beach that brought them together, and said yes to Balloon Boy, fourteen years later.

I take out the black gift box nestled in among my clothes and remove the lid.

“So, hang about, this was New Year’s Eve? As in New Year’s just gone?” Rosie had asked last week. It’s how we’ve learned about each other over the last two years, Rosie and I. Condensed histories, anecdotes, worries, hopes, and memories in tiny, thirty-minute digestible capsules on our lunch breaks.

“Yeah, he’d had a shit night and got in at just past midnight, French time, and I was already at home in my room, watching Jools Holland, so we FaceTimed. From our beds.”

Rosie had stared, wide-eyed, smiling. “So hot. And you said one of your resolutions was to meet someone?”

“Fall in love,” I’d said, and she’d fluttered her eyelashes and said, “Tell me what Lucas said again.”

“He called me bold,” I’d said, laughing. “Said, fuck, Em, that’s bold. And then he was sort of falling asleep, ’cause he’d had like a million whiskey sours, but he said—he said that had I ever stopped to think about why we were so hopeless when it came to love. Because he had a theory. It was us. We were probably always meant to be together.”

Rosie had squealed then, grabbing my wrists. “Oh god, Emmie, he’s going to ask you, you do know that, don’t you?” she’d said. “That’s why he said he can’t ask you on the phone, in case you hang up or freak out or something. It’s beautiful, isn’t it? Like, totally. After all these years . . .”

I look at the open gift box now, in front of me on the bed. The be­spoke leather sketchbook I’d bought a few weeks ago, his initials embossed on the front and on the corner of every blank page inside, didn’t feel like enough after that conversation with Rosie at work. She was right. It was beautiful—would have been. Two people who met against all odds, just when they needed each other. Same age, same birthdays, same obsession with Marmite and Footballers’ Wives. By chance, some might say, but I don’t. And I wanted to mark it with more than just a nice birthday gift. That’s when I’d decided to buy the gift box in front of me, excitedly making a list on the back of a napkin in the kitchen at work, of the important things that needed to go inside. I take an envelope out of it now, containing the first ever email Lucas sent me, when we were strangers. Subject: I found ur balloon! I take out the jar of Marmite too. Newly purchased, but a double of the first thing I ever sent Lucas (along with my French oral tape for him to listen to and check for accuracy before I handed it in to my languages teacher). I sent it because he said along with EastEnders and chip shop mushy peas, it was something he missed from home, which was London before France. That was when the mix CDs started. He’d sent the first one in exchange for the Marmite—a little thank-you that grew into something that became a ritual; a lifeline. I’d send  him something from home, and in return, he’d send a mix CD, which were like little letters in themselves. Eight in total. He still owes me the ninth. It’s the final thing in the box, the first CD. And although there is a single crack across the plastic casing, the card inside curling at one of the edges, it’s still perfect. The ink of Lucas’s handwriting navy blue and unsmudged. All straight capital letters, written calmly, confidently, slowly. Not like Lucas now, his handwriting flighty and energetic, as he is, always with something bigger, better to be doing.

I can’t. I can’t hand these things over tomorrow—a history of us, of how we got here, to this moment, in objects, across the usual breakfast table on Amanda and Jean Moreau’s picture-perfect patio. So I put everything but the CD in my suitcase, and replace the gift box lid on the single, benign, friendly thing inside—the sketchbook. I put it on the bedside cabinet, ready for the morning, and snuggle down into bed.

My phone lights up with a football news notification I wish I knew how to switch off, and I check the time. 12:33 a.m. Well. There it is. I am officially thirty. I’m thirty years old, and it’s safe to say that at this precise moment, I definitely do not know where I am going.

I close my eyes, pull my knees to my tummy. I never thought this would be how I’d begin my thirtieth year. Feeling tiny. Pathetic. Insignifi­cant. Because I know, deep down, I am made of strong stuff. Rebuilt with it, at least, the way we all are, over the years, with age and experience, skin thickening, heart softening, patched up double in the places prone to breakage. A sum of all the things that have hurt us, scared us, sheltered and delighted us.

And that’s what Lucas is to me, I suppose. Delight, yes, of course. But shelter. Safety. I rebuilt a new Emmeline—a new Emmie—after that Sum­mer Ball, aged sixteen, painstakingly. But from that very first email, he was the one who helped me do it. Supported every decision, applauded every tiny step I took as if they were giant leaps.

Tears sting behind my eyelids now. Because I know, in that certain way you only do when your gut has taken charge, that I have to support him. I know I have to applaud this step Lucas is taking—this huge, giant leap­—regardless of how much it hurts. I owe him that. That’s what a best friend does. A best woman.

I hold the CD in my hand. The final track listing the last thing I see before my eyes close and I fall asleep. 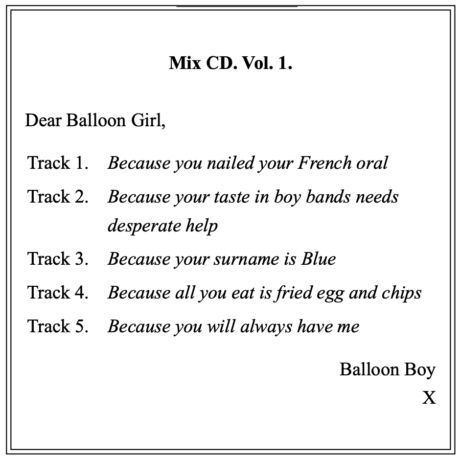