“You know you can’t keep a good brother down.”

The Chaos Motorcycle Club has won its war. But not every brother rode into the sunset with his woman on the back of his bike.

Chaos returns with the story of Dutch Black, a man whose father was the moral compass of the Club, until he was murdered. And the man who raised Dutch protected the Club at all costs. That combination is the man Dutch is intent on becoming.

It’s also the man that Dutch is going to go all out to give to his woman.

An all-new story in Kristen Ashley’s marvellous Chaos series is out this week, and I have a little sneak peek for you. This is Dutch and Georgie’s story.

“Knowledge of MC culture is not hard to come by, Mr. Black.”

Yeah, she knew Jag enough to know his last name.

And his brother might be a guy who enjoyed a good time, but who fucking didn’t?

Like Dutch, Jag had earned his patch, served the brothers, ate shit, did the grunt work, pulled his weight, and then some. Jag worked on the builds at the garage with Joker and he worked hard (Dutch didn’t work in the garage, somehow—mostly because he was good with numbers, and people (just not Georgiana Traylor, or Carlyle Stephens)—Dutch had become the de facto manager of the auto supply store attached to Chaos’s custom-build garage, both called Ride).

Jag was a good son. A good brother, of the blood and the patch. A good guy.

He wasn’t a loser or a user or a cheater or a dick.

She knew his brother, she knew him.

He was done with this woman.

When he looked at her again, he only twisted his neck before he bent it to give her his eyes when he said, “How ’bout we get your bag and get you home, Miss Traylor.”

Of course she’d have something like that to say.

Fortunately, she then nodded.

Their agreement to ride a stalemate until he could get shot of her lasted about seven minutes.

That being, until she moved forward, and he wanted to be able to ignore it, but he couldn’t.

Because when his father died, Hound stepped in and became his dad. And when Hound wasn’t around, Tack was. Or Hop was. Or Dog. Brick. The list went on.

In other words, he’d been trained well.

So when he saw the bag she’d clocked, he moved. And when she reached for it, he shouldered her out of the way and nabbed it.

“You did not just—” she began to hiss.

He strolled away, pulling her bag behind him, and saying, “Protest to the other libbers who give a shit. Let’s just get out of here.”

He felt her following him mostly because he couldn’t miss she did it seething.

Dutch further did not miss the irony—and if he wasn’t so pissed, he’d laugh at it—that her bag was a goddamn carry-on.

When they made it to his truck (fortunately, the way there was silent), he stowed it in the cab behind her seat.

He then nearly broke her hand when she made a show of reaching for her door to close it after she’d gotten in, but he was making a show of standing there, holding it, waiting for her to get her round ass in, then he made a further show of throwing it to.

Luckily, she had quick reflexes and got her hand out of the way.

They were headed to the parking booths when she declared, “I’m paying for parking.”

And he would admit, though never to her, that it was plain stubbornness when he replied, “Absolutely not.”

He hit the button to roll down his window to pay for parking.

Of course, her being her, she did not let it go and they were barely riding free on Peña Boulevard when she stated, “You could have just swung through arrivals and avoided parking fees altogether.”

“I was picking up someone for my brother, woman or not, and my momma and daddy, both Chaos through and through, raised me better.”

He heard her huff.

But she said not a word.

That shut her damned mouth.

In fact, it shut her mouth so good, she was silent for so long, he got tweaked enough to look her way.

She had her head turned and was staring out her side window.

And she was a serious pain in the ass, but the look on her face that he caught even in profile, which wasn’t annoyed, frustrated, obstinate or haughty, but something softer, and definitely something concerning, made him wonder what she’d been doing in DC.

And if maybe something that happened there, or was the reason why she went there, was not only putting that look on her face, but also putting her in a shit mood.

These thoughts being why he asked, “You okay?”

He’d turned back to the road, but he glanced and saw she’d done the same and was looking out the windshield when she answered, “I will be when you drop me off.” 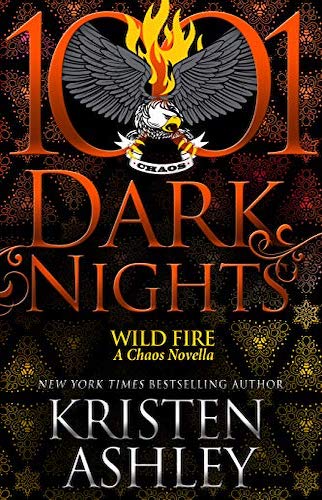