“Not every mistake deserves a consequence. Sometimes the only thing it deserves is forgiveness.”

The Voss family is anything but normal. They live in a repurposed church, newly baptized Dollar Voss. The once cancer-stricken mother lives in the basement, the father is married to the mother’s former nurse, the little half-brother isn’t allowed to do or eat anything fun, and the eldest siblings are irritatingly perfect. Then, there’s Merit.

Merit Voss collects trophies she hasn’t earned and secrets her family forces her to keep. While browsing the local antiques shop for her next trophy, she finds Sagan. His wit and unapologetic idealism disarm and spark renewed life into her—until she discovers that he’s completely unavailable. Merit retreats deeper into herself, watching her family from the sidelines, when she learns a secret that no trophy in the world can fix.

Fed up with the lies, Merit decides to shatter the happy family illusion that she’s never been a part of before leaving them behind for good. When her escape plan fails, Merit is forced to deal with the staggering consequences of telling the truth and losing the one boy she loves.

To win one of two signed hardcover copies of Without Merit by Colleen Hoover, please click on image below. Contest open internationally. 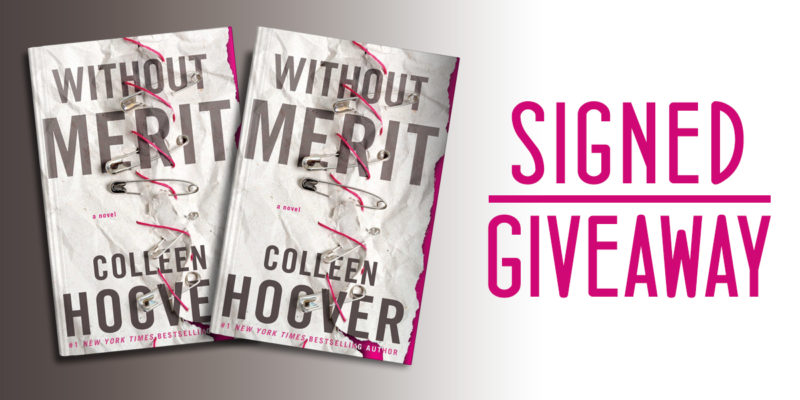 From the author of It Ends With Us and November 9 comes a moving and haunting novel of family, love, and the power of the truth, and together with Vilma Iris, I am excited to give you a sneak peek of it, as well as a chance to win one of two SIGNED and very exclusive hardcover copies.

How long will this last?” I ask the cashier, dropping the fifty-pound bag of dog food onto the counter.

“It’s for a full-grown black Lab.”

“Maybe a month. Month and a half.”

Oh. I was guessing a week. “I don’t think he’ll live with us that long.” She rings up the total and I pay with my father’s debit card. He said to only use it in emergencies. I’m sure food is an emergency to Wolfgang.

“You need help carrying it out?” someone from behind me asks.

“No thanks,” I say, taking my receipt. I turn around to face him. “I only got the one bag . . . what are you wearing?” I didn’t mean to say that out loud but I wasn’t expecting to be met with the likes of the guy I’m staring at right now.

Peeking out beneath his hat are sporadic pieces of red hair, too bright to be authentic. So bright, it’s almost offensive. His face is decent, a little imperfection here and there. But I didn’t give it much notice because my eyes went straight to the kilt he’s wearing. I guess the kilt itself isn’t tripping me up as much as the clothes he chose to pair it with. He’s wearing a basketball jersey and neon green Nikes. Interesting ensemble.

The guy looks down at his outfit. “It’s a basketball jersey,” he says innocently. “You don’t like Blake Griffin?”

I shake my head. “Sports aren’t my thing.”

He sets what looks like a lifetime supply of beef jerky on the counter. I wrap both arms around the ginormous bag of dog food and head to my car.

The car I drove here isn’t specifically mine, but that’s be­cause my father never keeps a car long enough for any of us to claim ownership over it. Vehicles have always rotated in our driveway and the only rule is that whichever person leaves the house first each day gets first pick. I think that’s the true reason behind Utah’s extreme punctuality.

Last month a faded red 1983 Ford EPX appeared in the driveway. It’s such a terrible car, they stopped making them almost as quickly as they started. I think my father has been having trouble selling it because it’s the longest any vehicle has lasted before it’s been sold. And since I rarely leave the house on time, this unfortunate Ford has been driven more by me than the rest of the family put together.

I place the bag of dog food in the trunk and am about to open my front door when kilt-guy appears out of nowhere. He’s chewing on a piece of beef jerky, assessing my car like he’s about to steal it. He walks toward the front of the car and taps his neon green Nike against the front tire twice.

“Think you can give me a ride?” He looks at me and leans against the car. Despite the kilt, there’s no trace of a Scot­tish accent. There’s also no trace of a Texas accent, either. But when he said the word you just now, he sounded a tad British.

“What kind of accent is that?” I ask. I open my front door and stand behind it to put a barrier between us. He looks harmless, but I don’t like his confidence. I need to shield my­self from it. Overly confident people should never be trusted.

He shrugs. “I’m from all over,” he says, but he says, over with an Australian twang.

“Ovah? Are you Australian?”

“Nevah been there,” he says. “What kind of car is this?” He walks to the rear of the car to read the make and model.

He’s back from the rear of the car, but now he’s standing on the same side of the door as me. “My sister’s house. It’s a few miles east of here.”

I give him another once-over. I’m aware of how stupid it is to give a complete stranger a ride. Especially a stranger in a kilt who can’t seem to nail his own accent. Everything about him screams unstable, but my spontaneity and refusal to weigh the consequences of my decisions are my two favorite things about me.

“Sure. I’m headed east.” I sit in the driver’s seat and shut my door. He grins at me through the window and runs around to the passenger side. I have to lean across the seat to unlock the door so that he can open it.

“Give me a second to grab my things.” He takes off in a sprint across the parking lot until he reaches a pile of stuff propped next to the front entrance of the store. He grabs the backpack and throws it over his shoulder, then a thirty-gallon black trash bag and a small suitcase on wheels.

I agreed to give him a ride. Not him and everything he’s ever owned.

I pop the trunk and wait for him to finish loading his belongings. When he’s back inside the car, he puts on his seat belt and smiles at me. “Ready.”

“A person without a home.”

I shake my head. “You are the strangest person I’ve ever met.” I crank the car and put it in reverse.

“You obviously haven’t met very many people. What’s your name?”

I shoot him a quick glance before pulling out onto the highway. “Luck? Is that a nickname?”

“Nope.” He opens his container of beef jerky and offers me a piece. I shake my head. “You a vegetarian or something?”

“I have granola bars in my suitcase.”

“I was going to suggest a drive-thru,” Luck says. “Are you thirsty?”

“Why aren’t you in school right now? Is today a holiday?”

“No. I’m finished with high school.” It’s not a lie. Finished and completed are two different things.

“I’m twenty,” he says, moving his attention out his window. His knee is bouncing up and down and he’s tapping the fin­gers of his right hand on his leg. All his fidgeting has me ques­tioning my decision to give him a ride to his sister’s house. I make a mental note to look at his pupils if he faces me again. It would be my luck to pick up a random stranger who is com­ing down from a high.

“How many dogs do you have?” He’s still staring out the window as he asks me this.

He faces me and arches a brow. I use the opportunity to assess his pupils. Normal.

“Why are you buying dog food if you don’t have dogs?”

“Are you dog sitting?”

“Did you steal him?”

He grins. “I like black Labs. Where do you live?” I must make a face that indicates what I think of that invasive ques­tion, because he immediately responds. “I didn’t mean your exact address. I just meant in relation to where I’m going.”

“Where does your sister live?”

He shrugs. “This way,” he says, pointing in the direction we’re going. He pulls his phone out of his pocket. “I have a picture of her house.”

“You don’t know her address?”

He shakes his head. “No, but if you can just drop me off somewhere in the general area, I can ask around.”

“General area of where?”

“The general area of my sister’s house.”

I press my hand against my forehead. I’ve known this guy all of five minutes and I’m already overwhelmed. I have no idea if I like him or if I can’t stand him. He’s a little bit fasci­nating, but in a slightly annoying sense. He’s probably one of those people that can only be tolerated in spurts. Kind of like a thunderstorm. They’re fun if they only appear when you’re in the mood for one. But if they show up when they aren’t wanted, like at an outdoor wedding, they ruin everything.

“How did you finish school already? Are you one of those people that’s better at everything than everyone else? Like Adam Levine? You probably play guitar.”

What does that even mean? “No, I don’t play guitar. And I’m not better at everything. I’m not as good at asking questions as you.”

“You’re also not good at answering them.”

Is he seriously insulting my conversation skills? “I’ve an­swered every question you’ve asked.”

“Not in the way you’re supposed to answer questions.”

“There’s another way to answer questions other than giv­ing the correct answer?”

He nods. “You’re giving short answers, like you aren’t interested in having a conversation. It should be a two-man sport, like a Ping-Pong match. But with you it feels more like . . . bowling. Just going one way down the lane.”

I laugh. “You should learn social cues. If someone is an­swering your questions like they don’t want to answer them, maybe you should stop asking questions.”

PLOP…so ready for this! Come on Oct.

I can not wait for this book! Counting down the days!

It’s getting close to the release date!!
I’m so excited
Thank you Natasha for the lovely chance xo