What do a wrong number text, a burning building, and a quirky florist have in common?
A hunky firefighter with an extra-large…hosepipe.

In hindsight, I never should have opened that text message. The last thing I needed first thing on a Monday was a picture of some stranger’s, um, eggplant, in my inbox.
I also should have replaced the batteries in my fire alarm, because my Friday night did not need to end with my apartment building going up in flames.
But it’s fine. It’s fine. Everything is fine.
I’m only lying in a hospital bed with more split ends than I’ve ever had, almost all my Earthly possessions have turned to ash, and apparently, they don’t serve wine to patients in this place.
But like I said, it’s fine.
Until he walks in.
The guy who saved my life. My hero. Noah Jacobs.
And the universe is amusing itself at my expense, because the dirty photo I woke up to on Monday?
It’s his.

A new Romantic Comedy is out now from author Emma Hart—a standalone novel in a hilarious new series following three best friends and their hilariously awkward love stories—and I have an excerpt for you, as well as a chance to win a signed copy!

She looked at me the exact same way I imagined I was looking at her.

It was one thing to suspect that the purple-haired woman I’d hauled over my shoulder and carried out of a burning building was the girl I’d been texting all week. I swore I’d heard her give her name as Reagan to the medic, but I’d passed it off as hearing things.

I was working. I was doing my job. Between the burning fire and the sound of the hoses roaring through the night and the commotion of all the people gathered outside, there was every chance I’d heard wrong.

It was too much of a coincidence, wasn’t it? One accidental text message, a few conversations, and she happened to be the first person I rescued from that fire?

Judging by the way she was looking at me, she felt the same. I hadn’t heard things, and the beautiful, purple-haired woman in the hospital bed in front of me was Reagan.

Was she going to go into shock again?

She looked like she was. Her blue eyes were wide and horrified as they made their way down my arm and recognition set in. Her lips were parted in the most perfect little ‘o,’ and her purple hair was a mass of curls around her head, almost like a halo.

Something told me that she was a lion.

“Well,” I said, shoving my hands in my pockets, desperate to break the awkward silence. “This is a story to tell the grandkids, isn’t it?”

She blinked at me, and then her bottom lip wobbled. Just as I thought she was going to cry, she burst into laughter. She clapped her hands over her face to cover it as she giggled her way through the next minute.

I could do nothing but smile, so I leaned against the wall and waited for her to calm down.

“Pinch me,” she whispered, coming around from her laughter. “I’m dreaming.”

“’Fraid not.” I held up a hand with an awkward smile. “Hi. I’m Noah. I saved your life last night, and I believe you saw my penis by accident earlier this week.”

She bit her lower lip and dragged it between her teeth. “Hi. I’m Reagan. Thank you for saving my life, and I guess you can now judge for yourself if I have great tits.”

I made a show of looking. “That hospital gown isn’t really doing you any favors.”

Reagan glanced down. “Nah, I guess not. I’d adjust them, but I might set the arm off and Miss Louella will kick you out.”

I glanced at the machine. “Your heartbeat is going nuts. I’m surprised she’s not in here yet.”

“She saw you on the way in. She’s a woman. She’ll understand.”

She had absolutely no filter at all. It was somewhat refreshing.

I chuckled. “Look, I—I just wanted to make sure you were okay. This awkwardness aside… Are you?”

She nodded. “I’m fine. I didn’t inhale enough smoke for it to do any damage, and I’m over the shock. I just want to go home.”

“Yeah, they can be pretty rough in this hospital on fire victims, even if you seem okay.”

“No kidding. They won’t serve me wine, they won’t let me go home…”

“I see your priorities are firmly in order.”

She laughed, but it was weak. There were dark shadows under her eyes, and I’d put money on her not sleeping last night. “Can I ask you something? About the fire?”

“They don’t know how it started yet.”

“Just say it. I’m imagining a huge pile of ash that used to be my building, so…”

“It’s not quite that bad.” I cracked a smile. “But you won’t be able to get into your apartment anytime soon. The damage is bad. I don’t think anything is salvageable. I’m sorry.”

She shrugged and ran a thread from her blanket through her fingers. “I figured that was the case. Ugh, great. I’m going to have to move back in with my parents and my crazy great-aunt.”

She was taking it pretty well.

“Well, at least that insurance I’ve been paying out my ass for will finally come in handed,” she added, looking up and meeting my eyes. “I know it wasn’t my fault for once, so there’s that.”

She’d just lost her home and all her things, and she was talking about it like it was a burned Victoria sponge.

I should have known she’d be crazy from her response to my dick pic.

“No. Definitely not your fault. It started on the ground floor.”

“Damn it. If it was Harriet Wilkins and her damn wicca candles, I’m going to burn her ass at the stake.”

I frowned. “The old lady on the first floor?”

“Yes!” Reagan’s eyes flashed with annoyance. “She’s been told before about burning those candles all the time. All right, it’s mostly because the building manager is a staunch Catholic and went into her apartment praying about the evil that is witchcraft—”

“—But she’d been told it was dangerous to put them on the floor and let them burn while she hummed like she was being possessed.”

“Aren’t Wiccans supposed to be peaceful?”

“And little girls are supposed to be seen and not heard, yet here I am, being heard by anyone who will listen.” She raised her eyebrows like she was talking to an idiot.

The sound of two female voices outside the door stopped me from responding to her. The door jerked open, giving faces to the voices. One young woman about Reagan’s age had short blonde hair that curled at the ends, and she adjusted her red-framed glasses as she hauled a huge bag up onto the end of the bed, completely ignoring me.

The other had long, black hair and yellow glasses, and she rolled her eyes as she pushed the glasses up on top of her head how most people would wear sunglasses.

“Right,” said the blonde. “We went shopping since you don’t have any underwear.”

Reagan raised her eyebrows. “If you took my credit card, it’s your funeral.”

“Yours melted,” the black-haired girl said.

“So we took Preston’s,” the blonde added brightly.

“Acceptable. Go on.” Reagan flashed me a look. She’d clearly noticed that they hadn’t realized I was here, too.

Who the hell was Preston?

“With his permission,” the blonde went on. “I’m not sure we’re quite at the stage yet where I can just spend his money. Unless it’s on the raccoons, but he’s the one who bought that playhouse.”

I had no fucking idea what was going on.

“Can you get on with it?” Reagan asked. “I’m tired, and if you didn’t bring me a Subway, I will hunt you down.”

Ah. This was a friendship based on love and respect, I saw.

“Here’s the sandwich.” The black-haired girl produced a wrapped sandwich from her oversized purse and handed it to Reagan, who took it and motioned for them to continue.

This was getting weird.

The blonde pulled a bra out of the bag, and my eyebrows shot up. “There are three of these and the matching underwear.” She proceeded to pull out two more bras and three pairs of cotton panties.

“Great. Thanks. I guess neither of you noticed that we’re not alone.” Reagan’s eyes glittered with laughter.

Both women jerked and stared at me. The black-haired one looked me up and down appreciatively, and I fought a laugh as the blonde’s cheeks flushed bright red.

“This is Halley,” Reagan pointed to the blonde, then to the other one. “And this is Ava. And please excuse their rudeness.”

“Nice to meet you, ladies,” I said politely.

Reagan took a bite of her sandwich and said, “And this is Noah.”

Oh, shit, had they seen my penis, too?

To enter to win a signed copy of Kiss Me Tonight by Emma Hart, follow the prompts below.

Prizing and samples provided by Emma Hart. Giveaway ends at 11:59 PM (ET) on September 27, 2019. NO PURCHASE NECESSARY TO ENTER OR WIN. A PURCHASE WILL NOT INCREASE YOUR CHANCES OF WINNING. VOID WHERE PROHIBITED OR RESTRICTED BY LAW. INTERNET ACCESS REQUIRED. GIVEAWAY OPEN INTERNATIONALLY. 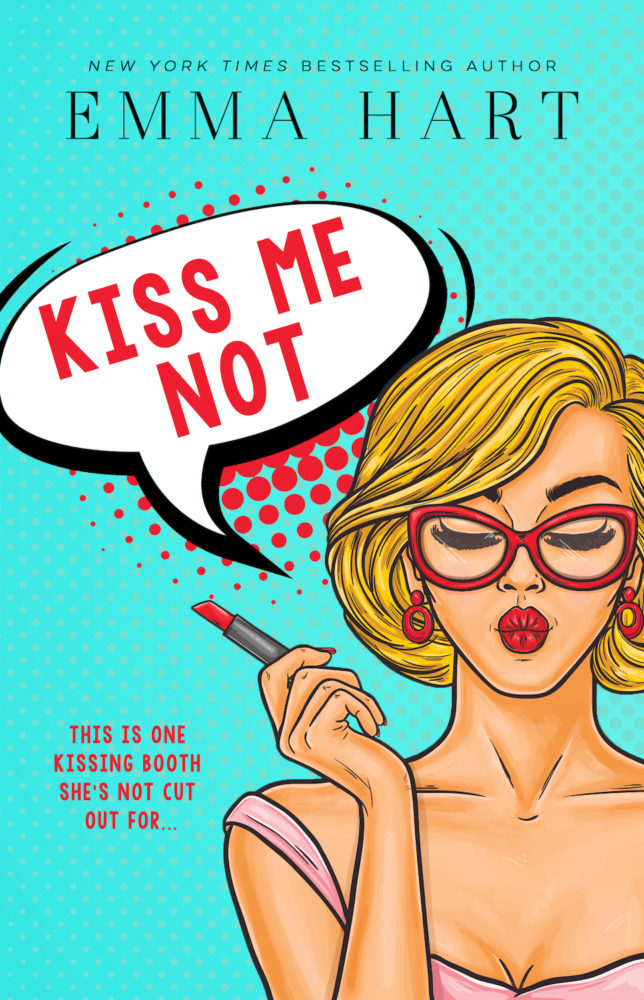 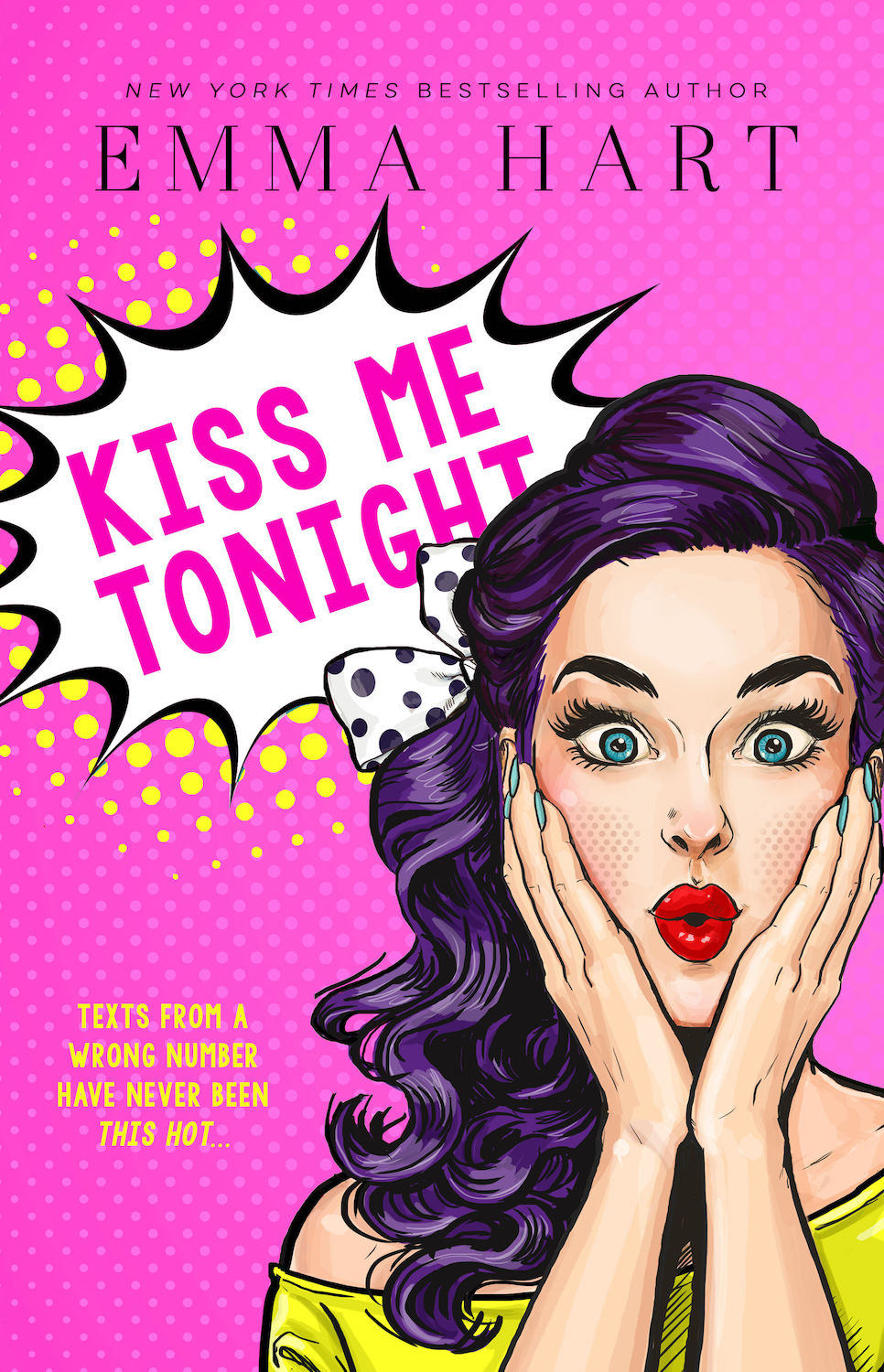 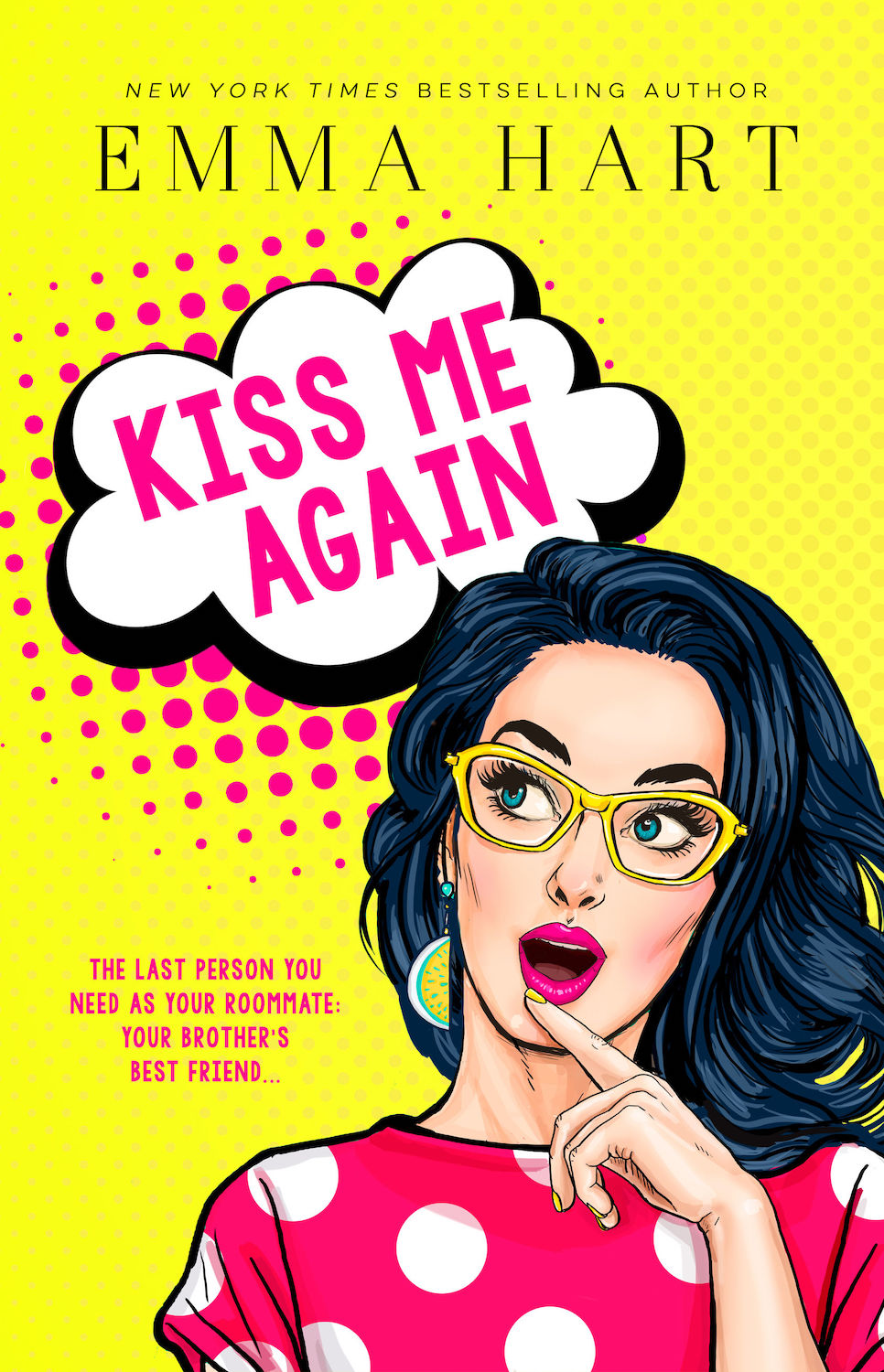 Ahhh!!! I love this excerpt so much!!!! I can’t wait to read this book!!!! Thank you for this amazing chance Natasha!!!!! I love Emma’s books and I know this book is going to be phenomenal!!!!

Thank you for the chance Natasha.