He’s a minister to whores… She’s a fallen woman…

Lord Lieutenant Henry Evesham is an evangelical reformer charged with investigating the flesh trade in London. His visits to bawdy houses leave him with a burning desire to help sinners who’ve lost their innocence to vice—even if the temptations of their world test his vow not to lose his moral compass…again.

As apprentice to London’s most notorious whipping governess, Alice Hull is on the cusp of abandoning her quiet, rural roots for the city’s swirl of provocative ideas and pleasures—until a family tragedy upends her dreams and leaves her desperate to get home. When the handsome, pious Lord Lieutenant offers her a ride despite the coming blizzard, she knows he is her best chance to reach her ailing mother—even if she doesn’t trust him.

As they struggle to travel the snow-swept countryside, they find their suspicion of each other thawing into a longing that leaves them both shaken. Alice stirs Henry’s deepest fantasies, and he awakens parts of her she thought she’d foresworn years ago. But Henry is considering new regulations that threaten the people Alice holds dear, and association with a woman like Alice would threaten Henry’s reputation if he allowed himself to get too close.

Is falling for the wrong person a test of faith …or a chance at unimagined grace?

COVER REVEAL: The Lord I Left

Scarlett Peckham’s magnificent Secrets of Charlotte Street series continues, and I have the great honour of revealing the cover of the third standalone in the series, as well as giving you a sneak peek.

They ordered supper, and when the meal came Alice dug in heartily, delighting in a tender slab of venison and plump potatoes crisped in goose fat.

Henry picked at his roast turnips and stewed beets. Alone with her, he was too ill-at-ease to have an appetite.

Alice looked meaningfully at the vegetables on his plate. “Don’t you ever get hungry, Henry?”

He was surprised by the question, since she knew the strictures of his diet.

“Vegetables and grains are very filling, and I sometimes have an egg or a bit of cheese.”

She met his eye. “But don’t you ever get hungry?” she repeated. “For more than you allow yourself.”

He wanted to laugh at the irony of such a question, coming from her. He wanted to throw back his head and cry out can’t you see?

He was so tired of pretending.

He put down his fork. “Alice, I’m always hungry for more than I allow myself.”

He realized she thought he was referring to what happened in the church.

Well, perhaps he was.

She tapped her lip, as if coming to some resolve. “Then we must order something delicious.”

But she was already flagging down the serving girl, requesting sweets. He protested, but when an apple tart studded with currants and dusted with cinnamon arrived, Alice added extra cream and dug a fork into the center, taking the best part for herself.

He liked the girlish way she licked cream off her spoon, closing her eyes in delectation.

She caught him smiling. “I thought you disapproved of rich foods.”

“I do. For myself. But you deserve them.”

She smiled, her dove’s eyes glimmering in the candlelight. “And why is it that I deserve them, and you do not?”

“Because you are a naturally regulated person, and I only aspire to be.”

The playful glimmer dulled in her eyes. She shook her head. “What do you mean?”

“I mean I am a sensualist by nature, which goes against my principles. Even a small bit of indulgence and I find myself becoming profligate. And so I must impose great discipline to live up to my ideals.”

This time, he was certain he was talking about what happened in the church.

Her face made clear that she knew it too.

She stared at him, a tiny sliver of her tongue resting on a tine of her fork. And then she speared the fork into the dessert again and prepared a perfect bite, with fragrant tender apples, succulent currants, swirls of caramel sauce, and a dollop of cream so sweet he could smell its freshness across the table. She held it out to him.

“Take a bite,” she ordered.

He couldn’t. This had gone too far.

She leaned closer. “Henry,” she whispered, “I promise I won’t let you have more than you can bear.”

To enter to win signed paperback copies of The Duke I Tempted + The Earl I Ruined by Scarlett Peckham, as well as some lovely Charlotte Street themed swag, follow the prompts below.

Prizing and samples provided by Scarlett Peckham. NO PURCHASE NECESSARY TO ENTER OR WIN. A PURCHASE WILL NOT INCREASE YOUR CHANCES OF WINNING. VOID WHERE PROHIBITED OR RESTRICTED BY LAW. INTERNET ACCESS REQUIRED. GIVEAWAY OPEN INTERNATIONALLY. 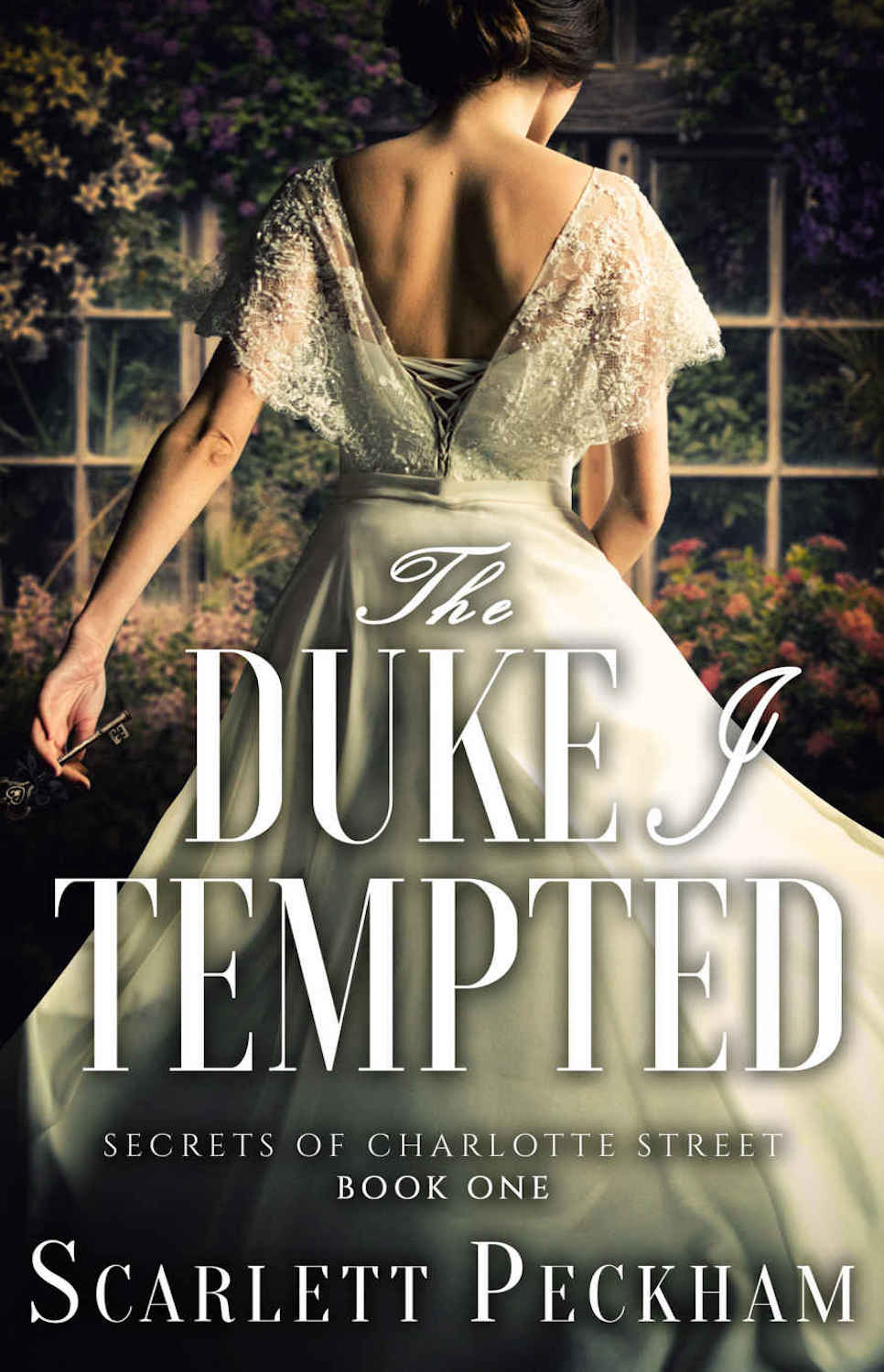 So excited to read this! And that cover ???

Thank you for introducing this author to me! Adore her work :)

I just love the covers for this series! So excited for this one ?

Ohh, I love these covers and I can’t wait to continue with this series.

Covers for this series are perfection! Not only are they beautiful but they really convey tone…all moody and mysterious. Love them!

Scarlett Peckham’s The Duke I Tempted & The Earl I Ruined are among the best books in the entire romance genre. Love her writing style — her characters are smart and complicated and interesting! I am so happy to hear we are getting new books in the coming months.

The Duke I Tempted is one of the most complex, sublime historical romance books that I’ve read in recent memory. My heart was so full after I read it and I couldn’t wait to read the rest of the series (The Lord I Left included!) . :) Thanks for giving us a little snippet/tasting of the book!

Oh Lord, I can already sense that I am going to gorge myself on this book =D

I love the restraint of color in the cover and the temptation in the excerpt itself. Well done!

Love the cover and the excerpt has me intrigued and excited to read the book!

The cover is very pretty. Love the coloring and the snow.

Love the cover & the excerpt. I am definitely going to read this book.

Lord love a duck!! That cover is beautiful!! It will definitely need to be added to my collection. And that excerpt?!? I think I’m going to love Alice….

This book releases four days before my birthday soooooo Happy Bday to me!! ?

I can’t wait for the new book, I love the series! And the cover is just so tempting!

Love the cover!! I can’t wait to read this book!

I’m so excited for this book!!!

Oooooooh yes I am so stoked for this next book! Love this series so much!!!

So excited! This author has been a delight.

This series has been everything I have ever wanted in romance but never thought could exist! The publication date can’t come soon enough! Thank you for the excerpt!

Can’t wait to read this book!

I am loving the gothic vibe of this cover! About to dive into The Duke I Tempted! ?

I love this. It’s got quite a gothic vibe to it.

This is a gorgeous, gorgeous cover.

Thanks for introducing me to these books!! I love them and can not wait until January. Going to Amazon right now to see if I can preorder!!!

The covers are gorgeous and so are the stories! I’m so eager to read The Lord I Left!

This book sounds fantastic! Added to my TBR

Beautiful cover, i bet its a great book!

This is going to be amazing! I can’t wait!

I haven’t been this excited about romance since Julia Quinn! I’ve already preordered the next two books. I can’t wait until January.